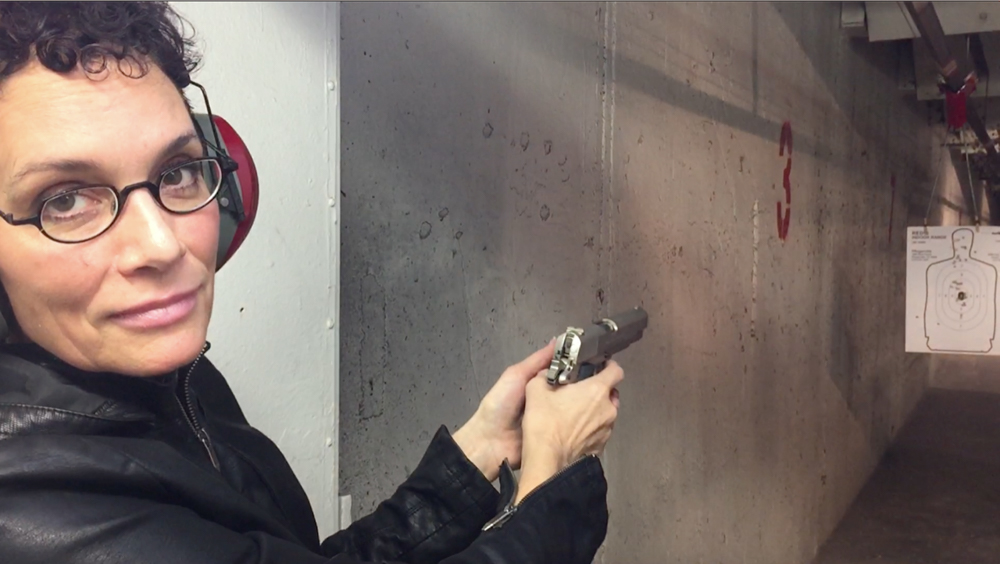 Carrington MacDuffie is a music star from grew up in New York before moving to LA to pursue her career. After a decade in Southern California, she decided she needed a change of pace. She decided to split her time between Austin and Seattle.

Carrington’s sound is unique, with deep meaning for lyrics and an immersive sound. I can’t put it into a single category. It feels like a mix of Mazzy Star and The Cure. She is also a poet, and that comes through in her music. She is also a voice actor. She voiced characters from World of Warcraft to Joni Mitchell’s biography.

She also is a fixed-wing pilot and an avid shooter. Her new EP, I’m The One, releases on April 24th. I had a chance to talk to Carrington about her life, target shooting, and her music.

John: How did you get into music?

Carrington: Well I’d say it’s more the case that music got into me. When I was very little, I loved the music my dad played on the stereo, and I spent many happy hours cutting up the rug to his upbeat choices and wondering at the grand scope of the classical symphonies. I played instruments and sang in choruses throughout my childhood, and in my teen, years I began writing songs on the piano – self-taught. As for the music business — that’s another matter! But I started showcasing at open mics in my late teens and found my way onto stages and into studios from there.

John: How would you describe your musical style?

Carrington: I think of it as indie rock or indie pop. It’s also been called Americana, especially in the UK, and sometimes dream rock or dream pop, terms from the ‘80s. In general, it’s considered Alternative, and I’d say all those descriptions are true. My melodies are very catchy, my lyrics are grounded in a deep background in poetry (I’m a published poet), I really like the dimension that electronics have brought to musical sound, and tender-hearted as I am, I just plain love to rock.

John: Are you excited about your upcoming EP, I’m The One, that is dropping on April 24th?

Carrington: Regardless of the groundswell of change we’re currently undergoing, and partly because of it, I’m totally stoked to be sharing this music at this time! I think the culture can use new messages and new voices, and I hope to contribute to a new perspective that cuts through all kinds of assumptions.

John: You were a voice actor in a game I used to play a lot, World of Warcraft. How did you land that gig?

Carrington: What a great game! I’m a voice actor as well as a recording artist, and that particular role came to me through my agent in LA. I was actually on vacation up in the San Juan Islands, and the production company had to fly me down to record the part of a shamanic Scottish dwarf from the Wildhammer Clan because they couldn’t find a voice actor in town skilled in the Scottish dialect.

John: You went to Johns Hopkins, Harvard, and Boston University. What did you study?

Carrington: My bachelor’s degree is in English with a concentration in poetry, including some graduate work. I had the opportunity to work with some highly regarded poets. I also studied astronomy and the physics of music.

The music department, where I used the pianos in the practice rooms to write songs on, was located quite far from where I lived in Boston, so I bought myself an old upright piano. It was too big to fit up the stairwell of my apartment building, so I had a window frame removed and the piano was hauled up the outside of the building and in through the window. Having that piano to release energy on got me through the endless papers I had to write for all those literature classes!

John: How did you discover target shooting?

Carrington: I was dating a guy in the Texas Hill Country, a musician as it happens, who grew up on a ranch and so was raised with guns and had an impressive collection. I didn’t grow up anywhere near guns, but there was always a .45 on his hip, so I became acquainted with that presence, and given the furor over firearms, I saw it as an opportunity to find out what all the fuss is about. As is the case with most things, the only way to really know what this particular thing is to handle it for yourself.

John: What do you like best about target shooting?

Carrington: The amount of focus required to handle a firearm, even just for target shooting, is excellent for quieting the mind. We spend most of our time with a lot of unhelpful chatter going on upstairs, and I think its good mental health practice to find any way you can to settle into stillness.

It’s easy to get jumpy in a firing range with guns going off on either side of you; it’s a serious matter to have a loaded gun in your hands, to break the sound barrier with a bullet, so you have to become utterly present and aligned with yourself. The challenge of hitting the target is really fun, and I really appreciate how it inspires you to be better, but what I probably value most is how target shooting enhances your ability to focus calmly in every other part of your life.

John: What type of guns do you shoot?

Carrington:  I’m really just a beginner. A 9mm fits my hands pretty well, and the weight is good. I’ve shot a Berretta M9, but I’ve really enjoyed practicing with a 1911 Colt .45 MK IV, even though it’s a bit heavy. I’ve fired a Colt .44, but that thing is a cannon for a girl like me! Next, I’d like to do some long-range shooting with a .223.

John: Anything else you want the readers to know?

Carrington: We’re all in this together.