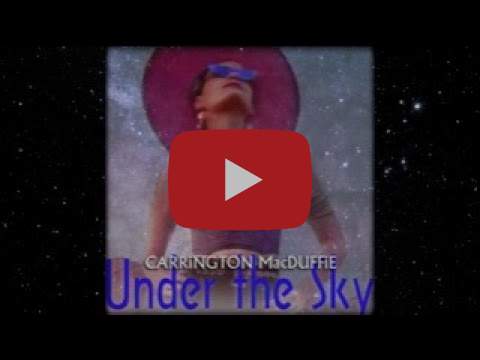 ingroov.es/sweet-little-mystery-ctuk2
CARRiNGTON MacDUFFiE: Sweet Little Mystery – The fabulously named Miss MacDuffie (born in New York with an apparently long Scottish lineage) has a day job of narrating audiobooks, but she’s also a very accomplished singer-songwriter. Her voice is bluesy, sultry and filled with emotion. This is an all-too-short album. of seven original songs and a version of Sweet Young Thing, which was composed by Carole King, Gerry Goffin and Monkee Mike Nesmith. Precious Kisses is a heartfelt track about someone dying of cancer, while latest single Under The Sky was influenced by long treks through the desert. – London Daily Express

“A haunting yet lilting melody converge upon Carrington’s voice and set the scene for a chilling, melancholy, yet beautiful song by one of the most creative artists working today.”

“With the country now coming back together, what an amazing album CARRiNGTON MacDUFFiE is giving us all at this moment. ‘Sweet Little Mystery’ contains songs that will fill your heart, spirit and give you hope.”

To watch the music video for “Under The Sky,” visit HERE.

To watch the interview and music video premiere for “Under The Sky” on WBRC, visit HERE.

“I wrote Under The Sky while spending time in the California desert, so that became a natural setting for much of the music video,” shares MacDUFFiE. “This vintage piece, shot entirely on 16mm film, gives it an organic, earthy feel. The live footage gives a glimpse of some unique, dynamic performances, unlike anything you’re able to see today. This music video has a special place in my heart.”

MacDUFFiE continues to meet the needs of her fans by creating music for all to enjoy. She recently released her latest album, Sweet Little Mystery, which includes the perfect combination of mystical yet edgy tunes. MacDUFFiE is excited to bring her special energy back to the stage to share her creativity and imagination that is present in each song she writes. Her fascinating persona visible in the “Under The Sky” music video continues to amaze all that encounter her one-of-a-kind spirit. Never one to slow down, MacDUFFiE is already enthusiastically working on her next project that followers will not want to miss!

About CARRiNGTON MacDUFFiE:
Far-reaching influences of a lively musical childhood weave through Carrington’s unusual, hook-laden songs, and stand out in her new LP, Sweet Little Mystery. The spirit of independence runs deep in her lineage as well as in her music, with her forebears having fought in the American Revolution. This maverick spirit ignites Carrington’s journey and calling in life.

A native New Yorker, Carrington’s love for music was sparked in early childhood while listening, dancing, and singing to the records that her dad, a huge music aficionado, was spinning — Teddy Wilson, Beethoven, Herb Alpert, Hudson River folk, Scottish marches, exotic World, classic rock, and the Beatles, among many other artists. She went on to study at Johns Hopkins, Harvard, and Boston University, where she earned a Bachelor’s degree in English.

As a voice actor, Carrington served as the voice of Ancestry.com for several years, and she has narrated over 250 audiobooks, including biographies of Joni Mitchell, Pussy Riot, and Jack Kerouac. She has also voiced various video game characters, most notably a shamanic Scottish dwarf in World of Warcraft.

MacDuffie has performed throughout the United Kingdom, Germany, Holland, Belgium, and France, where she played at the popular club Belushi’s in Paris. Highlights in the UK have included shows and festivals in London, Bristol, Bath, Brighton, Manchester, Newcastle, Llandudno, Glasgow, Edinburgh, and Inverness.

In the spring of 2021, MacDuffie released her single Baby Played Me, and she currently has recording projects underway in Austin, Nashville, New York, and Glasgow. The music video for the title track of her new LP Sweet Little Mystery has received over a quarter million views on YouTube.

Whether making music, voicing works of literature, training in small plane piloting, or savoring the zen-like concentration of target shooting, she is led by her passion for creativity, and, of course, independence. “I think the purpose of life is joy,” says Carrington. “I see the world as one big art happening, and I love participating in it”.