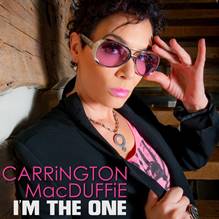 Carrington’s native love for music started in her early childhood in New York when she listened, danced and sang to the records played by her father, a great music lover. Names like Teddy Wilson, Beethoven, Herb Alpert, Hudson River folk, Scottish marches, Bob Dylan, classic rock and the Beatles, among many other artists. She studied in New England and Baltimore and lived on the beach in Los Angeles for ten years. She currently splits her time between Austin and Seattle. In 2018 MacDuffie released her full album “Kiss Make Better” after a series of EPs. This “I’m The One” also falls under the heading of EP. This “I’mT he One” was recorded at the “Farmland Studios” in Nashville, TN. Electronic input has always had a major influence on the music of MacDuffie and so has this EP that opens with title track “I’m The One”. Carrington MacDuffie also has a full life outside of music with her career as a versatile voice actor who has led to such diverse activities as telling biographies of Joni Mitchell, Pussy Riot and Jack Kerouac, and playing a shamanic Scottish dwarf in World of Warcraft . However, music is clearly a big part of her life. This “I’m Th eOne” clearly has a better grip on the roots music than the Indie happenings, witness the Bluegrass infected “Glasgow”. A bit of a nod to the style of “Of Monsters and Men”. With “The Way You Were Mine” we get a bit of a cool down after the first three hectic songs.